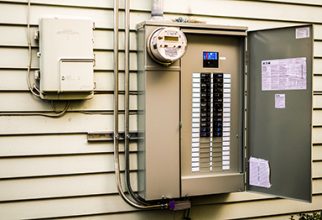 How to Know When You Need a Bigger – and Better - System 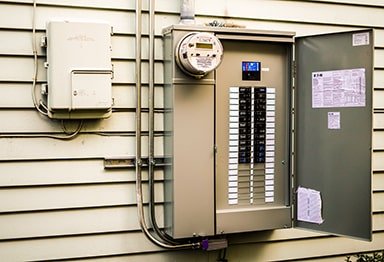 With a nod to Julie Andrews, who memorably sang this refrain in the fan favorite “Do-Re-Mi” from the 1959 musical The Sound of Music, “Let’s start at the very beginning … a very good place to start …”

Most homeowners could benefit from a tutorial on the basic terms electricians use when describing an electrical system.  After all, knowledge is power. And the better we understand the fundamentals of the life force that keeps our homes humming, the more effectively we can communicate with our technicians and evaluate their recommendations.

So, with the help of our good friends at dictionary.com, let’s begin our primer on electrical panel components.

The strength of an electric current measured in amperes.

The basic unit of electrical current in the International System of Units(SI), equivalent to one coulomb per second … Abbreviation: A, amp.

Also called electric circuit. The complete path of an electric current, including the generating apparatus, intervening resistors, or capacitors.

Also called breaker. A device for interrupting an electric circuit to prevent excessive current, as that caused by a short circuit, from damaging the apparatus in the circuit or from causing a fire.

Pertaining to or noting a mechanism built into a system, as in an early warning system or a nuclear reactor, for insuring safety should the system fail to operate properly.

A tube, cord, or the like, filled or saturated with combustible matter, for igniting an explosive.

A housing for electric fuses.

Now that wasn’t so bad, was it?

Armed with this newfound knowledge, let’s take a deeper Fischer Electric dive into the electrical panel itself. And we'll tell you how to know when it’s time for an upgrade.

A little more about electrical panels

To add to our brief electrical component tutorial, the fuse box takes the feed coming in from the street through the meter on the outside of your home, which is sized according to what service you’re using, into the electrical panel that’s generally found inside your house.  This main panel includes all your wiring, circuit breakers and other serviceable parts.

A typical electrical service panel will last a long time.  There’s not a lot of wear and tear.  Quite often, it’s “one and done” until you find that you need more space or amperage.  Rarely do the systems fail and cause a service drop.  For instance, one installed in the 70s may be humming along just fine.  It’s usually when you find you need added capacity that it’s time for an improved, higher quality panel.

If your home's electrical system is working fine, you most likely won’t even think twice about it.  But if you’re planning to remodel your home, or add a hot tub or similar device with greater capacity requirements, that’s usually when you find out that your current system is inadequate – and possibly unsafe – to handle your home’s growing electrical power needs.

What are some signs that you may need a better, higher-capacity system?

Red flags that something’s amiss are an increase in flickering lights, fuses blowing, and crackling or buzzing sounds.  Once or twice, you may be fine with just flipping your circuit breakers.  But after that, it becomes a potential fire hazard that you won’t want to ignore.

Here in the greater Seattle area, we see many younger homeowners who’ve moved here because of the ever-growing tech industry.  Often, they’re buying older homes where owners haven’t done much, if anything, to them for 40 or 50 years.  An inspection report may identify the need for an electrical panel upgrade. Often, new residents will request one regardless for safety reasons and to efficiently handle all their appliances, gadgets and devices.

This may come up when they’re remodeling a kitchen, for example, and find out that they have too few outlets – and they’re not properly located – to handle their espresso machine, juicer, phones, tablets, etc.  This makes it the ideal time to look at the system and ensure that it has enough service size and spaces to handle both current and future electrical needs. This is particularly true as their family grows with the addition of children and potentially older parents living with them.

Many older homes have 60-amp boxes with fuses instead of breakers – and possibly only a single 240-volt circuit that can comfortably accommodate one large appliance plus a few additional fuses to handle the remainder of the wiring.  That may have been good before, but isn’t nearly enough to handle today’s homeowners with their much increased electrical demand.

When it comes to upgrading to a 125- or 200-amp service, the cost is negligible. The smart call is to go with the larger, higher amperage panel that can handle both existing and future capacity.  That way, you can add that LED lighting, relaxing hot tub, state-of-the-art dryer or other Energy Star®-efficient appliances – or run your central air-conditioning or electric heating – without being worried about overloading your circuits.  And unless you have a house and a rental unit with high electrical usage, there’s no need to go with any more than 200 amps – which has become the gold standard for new homes as well as renovated older dwellings.

A standard panel upgrade entails replacing your fuse box, your failsafe (at the circuit breaker box or fuse panel,) the breakers, the wiring around the fuse panel and/or coming from the utility grid into your house (from aluminum to copper,) and the panel itself. This generally takes a day to install.  If you’re looking at a whole service upgrade which involves both the meter and the panel, our Fischer Electric technicians typically complete this within two days.  All work is either executed by, or under the close supervision of a certified journeyman. Once the system has been inspected, the city comes in to check code requirements and do the final connection to the electrical meter.

The beauty of electrical panels, as a whole, is that very little – if any – routine maintenance is needed.  The systems generally function very effectively and efficiently on their own, and only require service calls when water gets into them or an electrical component fails.

If you’re remodeling your older home or experiencing intermittent flickering lights, fuses blowing or unexplained crackling  sounds, call Fischer Electric today at 425-563-2900 or use the Contact Us form on our website (www.fischer-electric.com). Our experienced journeymen electricians are happy to provide an estimate for getting your electrical panel up to speed and up to code.

← Remodeling Your Home? The First Place To StartCOVID-19: PROTECTING OUR CUSTOMERS →